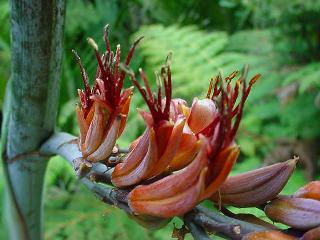 NZ Flax was once an important crop that was cultivated for its fibre. Phormium reproduces asexually by the production of" offshoots" with the typical plant consisting of tens of offshoots both from the original seedling  and from subsequent offshoots. Reproduction by offshoots is the most common form of horticultural nursery reproduction.
Sexual reproduction is by large upright inflorescences up to 5 metres tall. Flowering varies from year to year. Strength of flowering seems to be correlated with high temperatures in March and June the autumn before flowering. Production of an inflorescence by an individual offset prevented subsequent vegetative growth of that offset. Flowering of offsets eventually leads to their death.
All flowers are hermaphrodites, being functionally male and female. The flower is male first changing to female a week or so later.  This ensures a high level of pollination from another plant. The plant does not want to pollinate itself so being hermaphrodite means the female stigmas are receptive to pollen once its own pollen has been shed.
The capsules produced by the flowers have 2 types of seed. Those seeds which are the results of self pollination are generally small and infertile while those that result from cross pollination are large, with a fully developed embryo and an attached wing for wind dispersal.
Sow the seed from February in a glasshouse and germination should be effected within 2 months. The seedlings show a large amount of variation in size and colour of the leaves.

Please confirm you want to remove all the items in your cart.

Please Login or Order as a New Customer

When you've finished you'll have the option to create a password which will allow you to save your details and make your future purchases even faster.

Are you sure you want to log out of the site?

Thank you, your message has been sent successfully.