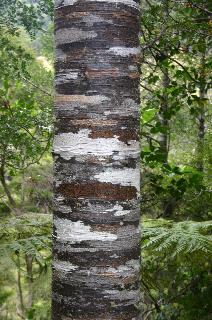 The forest giant of Northern New Zealand. Kauri forms a stately, pyramidal-shaped specimen that does best in the open in fertile soils. It will survive in most soils. Susceptible to frost while young.

Kauri fruits annually and the female cones can be found in plentiful supply on the tree.   They can be difficult to pick. Sometimes they can be gathered from beneath the tree where they  fall and shatter but mostly climbing the tree is the only method to obtain the seed in quantity. 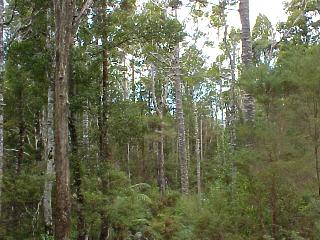 The cone is a particularly handsome oval shape about the size of a tennis ball when ripe, mature in March till April. Collect the first and second week of March. The litter from the tree  turns  the ground golden brown at this time of the year.  Source fruiting trees in late spring and wait until the trees begin there annual leaf fall before picking.  In the cone a single  winged seed is attached to each scale, with the exception of the apical and basal scales. 50-110 seeds per cone. 90-110 seeds per gram. The weight of each seed may vary considerably from 0.0065g- 0.0312g, depending on where in the cone the seed was formed. The heavier seeds are generally found in the centre of the cone.  Seed viabillity approx. 50% per cone. The cone disintegrates on the tree releasing the seed to the wind. Old reports mention the large number of cones that fall prematurely to the ground due to the depradtions of the Kaka.(Nestor occidentalis). This is no longer a common occurrence on the mainland, although  Kaka shred the cones to eat the ripening seeds on Little Barrier Island. A wet summer can cause the infection of the cones with the fungous disease Pestalozzia funerea.

The seed should be sown immediately on collection in a free draining mix in a deep seed tray. Seed germination decreases to less than 1% within 8 months. Do not remove the wing from the seed as this may act as a wick to aid water absorption. Sow seed down and wing up, in a moist, warm environment. Light is necessary for germination. If conditions are suitable  germination may proceed within a week of sowing and  may continue spasmodically until early spring. The seedling is from 4-6 cm. high with 2 lanceolate cotyledons. The single, long, fleshy, taproot may be 8 cm. in length at this stage. 4 to 5 months after germination the seedling may be 10 cm high with a deep reaching tap root and a few fibrous laterals. they grow well in a long bag PB10 size. As they grow they can put on 10 cm spurts in a week but only once or twice a year. They posess strong affinity to be apically dominant where if a terminal leader is broken another branch will adopt the central bud. The tree will eventually end up vertical.

Please confirm you want to remove all the items in your cart.

Please Login or Order as a New Customer

When you've finished you'll have the option to create a password which will allow you to save your details and make your future purchases even faster.

Are you sure you want to log out of the site?

Thank you, your message has been sent successfully.